What do you get when you take one decked-out Lego car, three Form1 employees and 11 days driving across some of the dirtiest roads in Australia? Variety Bash - the longest running and most iconic charity motoring event in Australia.

Due to recentCOVID-19 developments this year’s Variety Bash has been postponed. The new dates for the Variety Brydens Lawyers Bungarribee to Bakers Creek Bash are August 7-16, 2022.

“I’ll never forget the day in 2013 when Justin O’Malley, one of my business partners in Canberra, called me up and said, ‘Do you want to come on this year’s Variety Bash? You’ll love it or hate it.” I had no idea what it was, so I said, “I’ll get back to you.” Minutes later I called him and said, “Why not?”

I knew it would be different and a great bonding experience with a mate and colleague but I got so much more than I ever expected. Variety is The Children’s Charity and there’s something special about helping sick children and their families.

I had no clue what I was getting myself into that year and I was totally set up by my team. Every year you choose a theme and that first year our theme was Hogwarts. I dressed up as Lord Voldermort and wore this crazy black dress and painted my face every day, for 11 days. The heat was unbearable! On day one we left Bankstown and broke down before Lithgow. We thought, ‘Ten days to get to Ballarat – this is going to be fun!’ When we arrived back in Sydney Justin said, “Now we’ve survived the Variety Bash together, we’ll survive business together”. He was right and we’ve been supporting the cause ever since.

Doing It For The Kids

Variety was founded in 1928 and the Bash began in 1984 when Dick Smith invited a bunch of mates for a “drive in the bush” to raise funds. This year (2019) will be Form1’s seventh year. Every year around 100 cars participate and drive across Australia, visiting many remote schools and raising money for kids in need.

Each car must raise $8500 to enter the Bash and the money goes directly to Variety. We usually raise funds through sponsors and work contacts, friends and family. Over the years we’re raised over $45,000 which I’m really proud of.

The track is different every year but it always starts and finishes in a town starting with the letter B. Our biggest trip was over 8000KM, on mostly dirt roads, from Bass Hill (Sydney) to Bunbury (Perth) and onto Broome. Every car has a minimum of two people in it – a navigator and a driver – so the driving’s shared. Every morning you pick up your route notes and there’s an ongoing joke, ‘never follow a Bash car’, because they’re always getting lost. We’ve been lost a few times.

Most days we visit two schools – one in the morning and one at lunchtime. One day we pulled up to a school that had 10 kids in it. Ten kids and 100 cars pull up to give them gifts – you can just imagine the look on their faces! We pay for meal tickets before we go and along the way Variety give the meal money to the towns we pass through. If we have breakfast at a local school the school gets the funds. Some towns make more money in one day from Variety Bash than they make in a year so everyone benefits. When 100 cars fill up on petrol in one small town that adds a huge cash injection to that place.

In 2014 we launched our Lego theme and in 2017 we invested in new outfits, complete with Lego heads, and a new look for the car.

We leave Sydney on June 28 (2019) and travel from Bondi to Batt Reef, Port Douglas in the Queensland. From Sydney icons to Great Dividing Range and Bebo State Forest we’ll take in iconic rural towns and visit 11 schools along the way. Some nights we stay in motels other nights we’re in a swag, it always varies.

Connecting with other teams is a really special part of the journey. Some cars pull up and make coffee for everyone in the morning and in the afternoon the Bash Busters host the party stop. Super Hubert is there every year and puts on a magic show for the kids.

I’m inspired by the number of volunteers who give up their time to support the Bash. There are four mobile workshop teams, with two mechanics in each car. If you break down they’ll stay out and make sure you get to the next stop. They’re always the last team to come in at night and they don’t leave anyone behind. Other people get you going in the mornings at the checkpoint – they mark every car off and sit there at nighttime to tick off the cars as they come in.

There are fines along the way too – you get fined $50 if you don’t wear your name tag or if you lose something. Don’t worry, if you lose something, Stuart Telfer (Motoring events manager) will have it at dinner and it’ll cost you $50 to get it back. One year I lost a swag and was greeted by a smiling Stuart over dinner. It cost me $50 to get it back to sleep in. There are raffles and auctions along the way so we’re always donating. 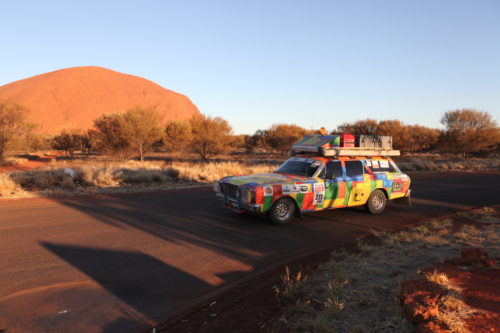 It’s hard to describe the feeling you get when you’re out on the road. Australia, especially the outback, is amazing – red dirt across the horizon, amazing sunsets, break downs, laughter and hanging out with great people. Variety brings together like-minded people who love raising money for disadvantaged kids and their families – it really tries to make their lives a little easier. The Bash has changed my perspective on life and I’m proud to be part of such an amazing charity.

A huge thanks to the businesses, clients and friends who support us along the way. We couldn’t get out and do what we do without you!

Click here to support our team and sponsor Car 632

The History of Variety

Did you know… Eleven men, who worked in the show business industry, used to meet once a week at a social club in Pittsburgh (USA) called the Variety Club. One year, on Christmas Eve, a baby girl was abandoned on the club’s doorstep at the Sheridan Square Film Theatre.

There was a note with her that read:
“Please take care of my baby. Her name is Catherine. I can no longer take care of her. I have eight others. My husband is out of work. She was born on Thanksgiving Day. I have always heard of the goodness of showbusiness people and pray to God that you will look after her. Signed, a heartbroken mother.”

Despite an extensive search, the mother was never found and the men informally adopted the baby and named her Catherine Variety Sheridan. This encouraged the club to start raising funds for other disadvantaged children and Variety – the Children’s Charity was born.The Variety Bash turned 30 in 2014, having raised over $200 million for children in need.”

Our Variety Bash by numbers

Did you know Form1 are Accredited Safety Practitioners?

> Form1 Community
> Our Services
> Our Story

@Form.1
Welcome, Graham Lewis! We are excited to announc

For the past few months, we have been collecting n